Gay brothers and sisters,… You must come out. Come out… to your parents… I know that it is hard and will hurt them but think about how they will hurt you in the voting booth! Come out to your relatives… come out to your friends… if indeed they are your friends. Come out to your neighbors… to your fellow workers… to the people who work where you eat and shop… come out only to the people you know, and who know you. Not to anyone else. But once and for all, break down the myths, destroy the lies and distortions. For your sake. For their sake.

I think about Harvey’s impassioned plea quite often. It whispers in my brain with both inspiration and reservation. Inspirational, because, as an out woman, I have experienced what only coming out will teach you, that life is significantly more reliable and fruitful without secrets and shame. Yet, as a Christian, I also know that the blanket call for coming out and the purging of all secrets is a dangerous, painful prospect. I know that it is not as simple as pushing folks into a river of deadly rapids with a promise of rest on the distant shore. The reality is, not everyone survives the journey. Not everyone who takes the plunge is a strong swimmer. Worse yet, there are plenty who are more than wiling to follow you into the deep just to push your head under into suffocating silence. When asked what prescription I’d give to an LGBT Christian on the necessity, urgency or even obligation to “come out,” I lack Milk’s confidence insisting that all LGBT should identify themselves. Maybe it’s the burden of my pessimist nature, but for those of us in earshot of anti-gay religious voices, I usually say “It does get better, but make sure you prepare for the crossing.”

Somewhere along the way, particularly in religious environments, coming out is an act more along the lines of a confession than a natural step toward self-awareness. The result is that it makes me think long and hard before I insist that every LGBT show their hand, knowing for certain that the Church still packs a punch. It’s so very difficult for the average person to hold the ground of what they know to be true about themselves against an onslaught of Biblical magnitude, that can be both confusing and demeaning. The reality is, that most people aren’t gay because it’s statement of style, it’s just one portion, one quality that helps complete the picture of their own identity. Yet we live in a time, where coming out often requires one be prepared to defend their position, as if it is, in some way a political statement or religiously justifiable way of being. We are asked to debate, what is in the end, ultimately undebatable. Most of us start out with little more than the story of how we just “know.” It’s the story, and it’s all I’ve got.

I was four years old when Harvey Milk spoke those words. I had yet to hear them when, at the ripe old age of 27, I realized I was actually lesbian. While I stared into the darkness of the closet so many people insisted was my certain destiny, I was fortunate, because Harvey, a gay man, decades before had asked his friends, his family, his neighbors and ultimately the world, to break the devastating chains of LGBT silence. I cannot imagine how I might have fared without the courage of those who came before me, who have risked so much by coming out in times when the costs were so assured and so great. It is because of every single person who has come out, that, today, I have the privilege, though it may not always be easy, to speak of my own sexual orientation today, with more ease than, arguably, any generation that has come before me.

Perhaps this is the hidden wisdom of Milk’s charge revealed by only what experience and time can teach us, in that there is nothing more disarming to prejudice than looking into the eyes and knowing the names of those we harm. For however much sexual orientation and gender identity will ever be debated, investigated or legislated, there is no more insightful evidence than that of the truth we carry in the story of our lives being lived out in the open. In the 36 years since Harvey encouraged the veil to be pulled back, we have discovered, not just to the heterosexual community, but to ourselves, that human sexuality is in actuality, fluid and diverse in expression and identity as the people it inhabits. We are, in fact, doctors, mothers, pastors and children, cross dressers, truckers, artists, politicians and more. Evidence suggests that orientation and gender are not merely expressions of sexual choices, but more likely the mysterious makings of what we call humanity. The more the story is told, the less power the stereotypes and myths have to limit our potential. The ignorance of the dark closet gives way to vibrant life, of whole beings, of good mental, physical and spiritual health. Once we dare to speak of what causes us fear, whether gay or straight, we now know that we are less inclined to punish or harm ourselves. In the light of day we can find community that shares in celebrating our unique traits, disarming those who once ridiculed us.

You see, this is where Milk’s charge broke the barrier of being solely a political call to action and tripped into the territory enduring wisdom, that if one does not speak, one will never be heard. He reminded us that silence in an anchor and it is impossible for any human being to have a full life bound in chains.

As National Coming Out Day approaches on October 11th, I’m grateful for both the discomfort and inspiration Milk gave for me to consider. For behind every political yearning for equality, behind every taboo that has ever been broken, at the core of any religious belief worth its salt, the one challenge that we all universally share is the need to be accepted as we are found.

It’s important to take a moment, at least one day a year, where we put aside viewing “coming out” as a political statement or an act of religious rebellion. I would argue, that it’s not just a gay right of passage. Learning to love yourself and to love others, however and whoever they confess themselves to be to you, that, to me, is a universal kinship we all share. To accept and be accepted. To be treated with equal opportunity, respect and dignity, one neighbor known to the other. 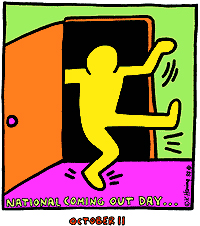