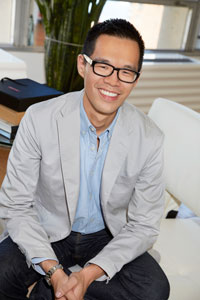 Jeff Chu is the author of “Does Jesus Really Love Me?: A Gay Christian’s Pilgrimage in Search of God in America?” The book—which chronicles his journey across America, interviewing people across the theological spectrum about their experiences, their beliefs, and their views on sexuality—has won praise from critics as diverse as Dan Savage (“a fascinating, thoughtful and important book [that] deserves to be widely read”) and Christianity Today ( . An award-winning journalist whose work has appeared in Time, Fast Company, the Wall Street Journal, and the New York Times Magazine, he has written and reported extensively on culture, society, and religion. The grandson of a Baptist preacher, he is an elder at Old First Reformed Church in Brooklyn and board president of Level Ground, a not-for-profit that seeks to use the arts to create gracious dialogue at the intersection of faith and sexuality.

Jeff speaks on his personal journey—coming from a deeply Southern Baptist family, struggling for years to reconcile his faith and his sexuality—as well as his work as a journalist, traveling around America gathering stories from across the theological spectrum about Christianity and homosexuality. He’s particularly interested in how we pursue grace and justice simultaneously; how we communicate with young people about God, the church, and sexuality; and how to cultivate gracious conversation despite our deep theological divides. A writer and essayist, he often incorporates pieces into his talks.

Get acquainted with Jeff from other speaking engagements

To inquire about booking Jeff Chu for an IOF Speaking Event, please use the contact form below.